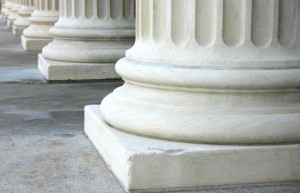 Mercer County Assignment Judge Mary Jacobsen dismissed the legislative committee’s lawsuits that sought Bridget Kelly’s and Bill Stepien’s compliance to provide the committee documents relating to their roles in the closure of local access lanes to the George Washington Bridge.

Both had maintained that their Fifth Amendment rights would be violated if they turned over the documents the committee was seeking. Usually, Fifth Amendment rights against self-incrimination are invoked while answering questions from prosecutors, but the judge maintained that the courts have “long recognized that individuals may also assert the right in response to a demand for documents.”

The judge maintained that the two have a reasonable fear that they could face prosecution “as a result of the documents requested by the subpoenas, either as principles or accomplices.”

The co-chair of the committee, Assemblyman John Wisniewski (D-Middlesex) reacted to the judge’s decision saying, “The committee felt it was very much in the public interest to compel the production of these documents, but as we’ve said before, there is more than one method to gather information in an investigation, and we will consider alternatives.”

Defense attorneys for both Kelly and Stepien praised the decision. Stepien’s lawyer maintained that the subpoenas were illegal and that the lawsuits were frivolous. Kelly’s lawyer said the judge’s decision should silence the naysayers who maintained that his clients’ Fifth Amendment defense in this case wouldn’t stand.

“I suggest that they read Judge Jacobsen’s opinion as a free tutorial on what the Fifth Amendment means to all citizens, “ he said.

No matter where you stand on the Bridgegate scandal, it is important to remember that everybody is entitled to defend themselves against charges levied against them. If you find yourself in a position where you need to defend your legal rights in a criminal case, the criminal defense attorneys at Lubiner, Schmidt & Palumbo, LLC in New Jersey urge you to call us at (844) 288-7978. We believe that everybody is entitled to the best defense possible to assure they get the best possible results in their case.